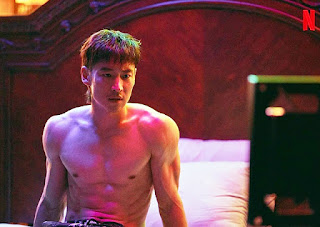 Move to Heaven is a Korean drama about three "trauma cleaners" who clean the houses, apartments, or rooms of the deceased, and deliver a box of mementos to the surviving loved ones: Geun-ru, who is autistic; his MMA fighter/ex con guardian Sang-gu (Lee Je-hoon, left); and best friend Na-mu.  (See my review of the first episode here) 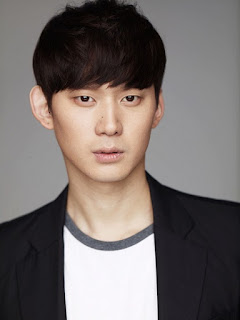 In Episode 5, they are assigned to clean the room of Joon Soo-hyun (Kwon Soo-hyun), a young doctor killed in a hostage incident.  His parents want everything taken away, no mementos of any sort. Geun-ru finds a letter that the doctor planned to send to a loved one, and has to deliver it; but when he asks the parents who it was written to, Dad throws it onto the fire.

Mom: He was our son.  We should have allowed it.

Dad: I would never allow such a thing in our family!

Aha, a mystery to solve!  The autistic Geun-ru becomes fixated on finding "the person he was in love with" to deliver the mementos to.  Sang-gu and Na-mu immediately say "yes, we must find this woman.  Who is she?"

Soo-hyun had tickets to a string quartet concert tomorrow night -- three women and a man.  Plus he put the letter in a gift box.  No doubt he was planning to deliver it at the concert.  The trauma cleaners deduce that the doctor was in love with one of the performers.  So they go to the concert hall, and while Geun-ru is in the bathroom, Sang-gu and Na-mu interrogate each of the three women.  Nope, none of them even knew Soo-hyung.

Geun-ru returns, and looks at a poster advertising the concert: "I know who the lover is."

Sang-gu: "Dude, it's a dead end.  We asked all three of the members of the quartet." 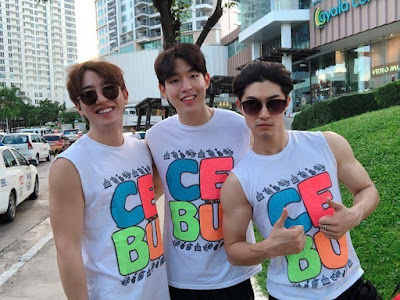 After their initial shock and disbelief, the trauma cleaners are perfectly nonchalant about gay people.  Even Sang-gu, the macho ex-con MMA fighter.  They approach Ian to give him the mementos, but he denies knowing Soo-hyung.  Then he says "I knew him once, but he's a stranger to me now."

The others say "Well, that's another dead end," but Geun-ru insists that Soo-hyung wanted Ian to have the mementos. They decide to try again, but Ian has gone missing, right before the concert!

After all the "no, this can't happen in Korea!" build-up, I expected Ian to be a villain, involved in a sinister plot of some sort.  But no: there are flashbacks of the two meeting, going out on dates, cuddling in bed, falling in love, and planning to go to San Francisco together.  Then they broke up when Soo-yun decided to obey his parents and marry a woman; that's why "he's a stranger to me."

Why San Francisco?  Because it is a cliched gay mecca?  And why does Ian have a Western name?  Is gayness a Western phenomenon?

The Trauma Cleaners track down Ian and tell him about the letter.  It was burned, but fortunately Geun-ru has an eidetic memory, and can quote it.   Soo-hyun wanted to get back together and go to San Francisco after all.

At the concert, Ian tells about losing "someone who was everything to me, someone who I will love forever."  He drops pronouns, but the ghost of Soo-hyun, sitting in the audience, hears him.

Postscript: Geun-ru still doesn't understand. Why were the parents against Soo-hyun dating Ian?  He was nice.  Sang-gu: "Parents always worry when their kids are different, like your father worried about you."

By the way, there's a second postscript with Sang-gu feeling guilty because he put his opponent into a coma during a fight.  Some shirtless MMA shots.